SIPMA S.A. is a solid company built on a sustainable basis, a company which uses the latest technologies 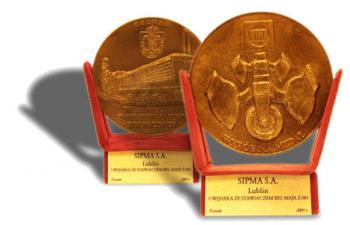 and management methods. It has deliberate and formed Mission, Vision, and Development Strategy.

Innovatory production technologies and agricultural machines changing the image of Polish agriculture and creating new farming production tendencies are the background of this success resulting from our Customers' satisfaction. Customer care policy has become an imperative in our business building on high quality products, reliable service and comprehensive access to original spare parts.

From the very beginning, i.e. since 1990, SIPMA S.A. developed and implemented to production more than 30 new products. An undoubted marketing achievement of SIPMA S.A. is the introduction to the Polish market the production technology of hay-silage in the form of round bales and ensuring its full mechanization. This resulted in the production of many types of round balers, bale wrappers and a number of machines supporting a full line of technology: disc mowers, unrollers and bale movers, self-loading stacking trailers, front loaders, bale shredders and others.

We give particular attention to maintenance of occupational health and safety among the farmers who use SIPMA S.A. machines. All our machines comply with the highest safety standards confirmed by CE safety marks. The best proof, however, of security confirmed in systematic applications seems to be the right to label virtually every machine produced by SIPMA S.A. with the "KRUS" safety mark.

As a part of the F-16 offset program, the North-American corporation Lockheed Martin has invited SIPMA S.A. to co-operation; simultaneously, our company has joined the Polish Industrial Group established by this firm. This achievement proves best the reputation of our brand and the way our company is perceived as an associate even by the most demanding partners.

Technological processes used in SIPMA S.A. take account of the needs of the environment. This is the result of consistent implementation of STRATEGY OF ENVIRONMENT PROTECTION, which aims to reduce wastes and minimize their harmful effects on the environment. Our efforts were recognized and appreciated – in 1995 we received the prestigious award from the Foundation for the Atmospheric Air Preservation for the greatest achievement in the field of ecology.

Among our successes is also a reliable method we adopted in doing our business in compliance with the highest legal and moral standards; this has contributed to create high Business Ethics giving our company an outstanding position on the market. It is confirmed by the fact that SIPMA S.A. is among four companies in Poland allowed to use „White Certificate” issued by the Bogdan Jański Academy in Warsaw. This is an award aimed for enterprises which in their activity are directed by ethical principles and achieve a high level of competitiveness and take active part in social live.

The reputation of our products among our Customers is evidenced by many medals, cups and diplomas granted by the committees of various trade fairs and exhibitions. We were the only Polish company to be awarded 8 golden medals during the International Trade Fairs "POLAGRA" in Poznań, the Jubilee Medal to commemorate the 75th anniversary of ITFP and the Great Golden Medal of ITFP. Furthermore, our products got medals on the "Eastern Trade Fair" in Lublin, International Trade Fair INTERRES in Rzeszów, International Fair of Agricultural Technology in Kielce as well as the Cups of the Ministry of Agriculture. Among other awards it is worth mentioning: the "Reliable Partner Certificate, "Perfect Company” award, the diploma of "The Best Innovative Company in Lublin Region" for the years 2002, 2004 and 2005, the title of “Business Gazelle” given by a daily newspaper Puls Biznesu in the years 2003, 2007 and 2008, the diploma “The Leader in Agricultural Machinery Branch” in “The Best Companies on Polish Market – LEADERS 2004” contest, the “Lublin Award of Quality” and “Lublin’s Solid Employeer” given by Przegląd Gospodarczy, the title of “Business Leader” given by the Regional Chamber of Commerce, “Innovation Certificate” given by PAN (10th place in 2005 in “Top 500 Most Innovative Companies in Poland” ranking), the title of  “Polish Merchant of the Year” in 2005 and 2006 for CEO Leszek Kępa given by Eugeniusz Kwiatkowski’s association and ITFP and the certificate “The Pearl of Polish Economy” granted in 2008. The latest achievement of SIPMA S.A. is the Gold Medal ITF POLAGRA 2010 Premieres for MAJA Z-583 bale wrapper.

Shown below in chronological order is the summary of the most important awards granted to SIPMA S.A.

Medal of Merit for the City of Lublin

Mayor of the City of Lublin

Employers of the Lublin Region

Mayor of the City of Lublin

Title of the Top Employers of Eastern Poland

Medal of Lublin City President on the occasion of SIPMA S.A. 25th anniversary

Statuette and honor - Employer of the Year 2011

The Polish Academy of Sciences PAN

White Certificate – Staff of the company with high work ethics

The Bogdan Jański Academy in Warsaw

IX place in ranking „500 the most Innovative Companies in Poland”

Polish Buyer of the Year 2005 in the branch „industrial articles” for SIPMA S.A. President Leszek Kępa.

Polish Buyer of the Year 2005 in the branch „industrial articles”

„EXCELLENCE IN BUSINESS” award in category: exporter and region promoter.

X place in ranking „500 the most Innovative Companies in Poland”

Regional Chamber of Commerce in Lublin

Lublin’s Quality Award in the category of big company

The Chapter of Lublin’s Quality Award

Reliable Employer of the Lublin Region

To the Best of the Best, the Great Gold Medal and Certificat "for production reaching world standards and very good financial and economic results"

The Chapter of Great Gold Medal

Marshal of the Lublin Voivodeship

AMR President Cup for contribution to modernisation of Polish agriculture

Award of the Agriculture Minister - forage harvester the Z-374

Polish Manager of the Year 1997 for Mr Leszek Kępa, the President of the Board